For nine straight steelheading seasons, Chris Strainer, owner of CrossCurrents Fly Shop, has made his annual pilgrimage to northern British Columbia to swing flies on two-handed rods in some of the most legendary steelhead waters on the planet. 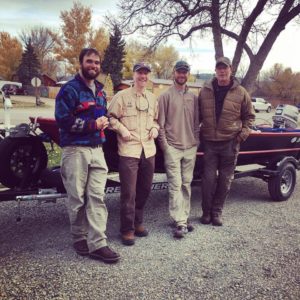 Over the years, Chris has learned much from his steelheading mentor, Gene Shimel, and although Gene is unable to travel north anymore, Chris continues to do so, and passes on the steelheading knowledge to the friends he takes with him. This year; myself, my father, and Taylor Todd were able to join Chris, and experience what Chris, Gene, and many others have enjoyed over the years. The trip of course had its ups and downs, a couple tense moments, and plenty of ‘hoody on’ chill moments. This is the story from our 2016 British Columbia steelheading trip.

As with most trips, preparation is key, so Chris gave us all an insanely long list with a crazy amount of items listed on it. When the morning of departure came, three of us were ready to go; and with some mostly gentle prodding, we were even able to get Chris ready on time. Now crossing the Canadian border shouldn’t be that tense, but when your trip leader’s passport expires a couple weeks from crossing into Canada, you never really know what will transpire during that crossing. Since the drive itself was right around 1100 miles, or as they say in Canada, 1770 kilometers, we decided to split the drive, to and from, into two days, spending the night in Canmore, both directions. 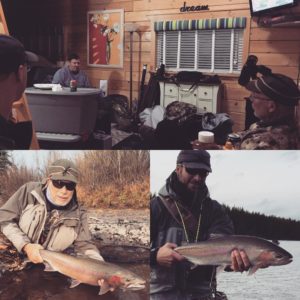 This was a smart decision on our part, because driving through Banff National Park during the daylight was a sight to behold, but enough about that, let’s get on to the fishing part of this story. Remember only that texting while driving in Florida is a primary traffic offense punishable by fines.

After arriving at the cabin and unloading the truck, it was now time to have a beer with our host Bill and figure out our fishing plans for the next day. There really was just one option for the first day, so rods were prepped, flies were looked at and talked to, and thoughts of connecting with steel the next day lingered in our minds as we headed off to bed.

Day one did not disappoint, with two steelhead and one salmon being caught in the first couple hours of being on the water, and by the end of the day, all anglers had landed a steelhead on the very first day. From fishing day one, all the way to fishing day seven; we experienced steelhead, salmon, bull trout, and a few sea run cutthroat trout. Some of the more notable fish for my dad and I, were his 32″ buck on day four, my 31″hen on day three, and the big ugly salmon that gave my 13′ 7wt. a run for it’s money on day six. Taylor and Chris typically fished different runs than my dad and I, so I can’t speak for them as to which fish were their most notable. 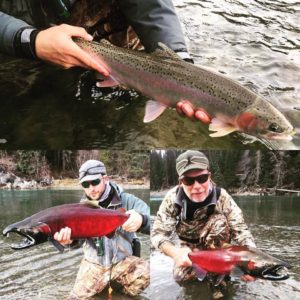 Also worth mentioning before I get to day seven, on the evening of day five our hosts Bill and Laurel invited us up for dinner, and can Laurel cook!

Fishing day seven was going much like the previous six days, except the boat was now taking on a significant amount of water, then late in the day, strategically when we were below the boat launch, the jet motor decided it was an opportune time to break down.  After a few attempts to revive the motor with no luck, we drifted the boat down to an area that was close to the road, then Taylor and I hiked the road to go get the truck. Now keep in mind, this was not a boat launch, and this jet boat is no drift boat or raft, so taking the boat out of the water, up the steep incline, and onto the trailer was no easy task, but somehow we managed to succeed. The main issue we had then, was we had one more day on our fish license, but no boat to take us up and down the river. Our last day of fishing would have to be a wade destination. If only we knew how to fish with a trolling motor, we’d have had put the current one behind us and taken the former.

We took a two hour drive and headed closer to the coast, closer to Alaska, to a river that doesn’t have the numbers of steelhead in it as our previous two rivers did, but the chance to land a 36″-40″ fish was possible, so the risk of not getting anything was well worth it. The river was gorgeous with crystal clear water, a sight we hadn’t seen for a few days, since the rivers we had been fishing turned muddy. Even though no fish were caught on this day, it was still great to experience another river that Gene had once walked it’s banks and waded it’s waters.

Eight days of fishing had now taken it’s toll; we had a broken boat, a broken trailer, and our bodies were now feeling the affects of fighting strong fish, chucking shooting heads with weighted tips and beautiful flies, while standing in cold currents. As I reflect back and think of all the great fish caught, the scenery seen, the ‘hoody chill’ moments in the evening at the cabin talking with Bill while drinking a beer, watching a football or hockey game, and tying flies, it was a pretty amazing trip. I shall return there again.