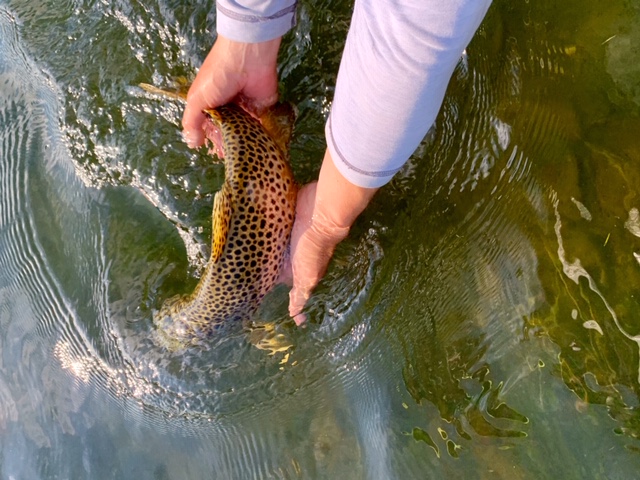 September is officially here in Craig, bringing with it refreshingly chilly mornings and rejuvenated trout. Some serious-sized fish are out there snatching up streamers. The nymph bite/ boat hatch is in full effect up at the ol’ concrete river-blocking wall (the dam). The hopper bite continues throughout the whole corridor. It is a choose your own adventure time of year on the MO.

Dry flies: Floating bugs are very much in vogue right now. They’re a good way to 1) avoid grass and 2) get some cool eats out of nowhere. A lot of fish are hanging out in/over/underneath the growing weed beds, so search any area with grass, current, gravel, and depth. If you can find any two or three of those puzzle pieces in the same spot, you’re in business. A hopper to an attractor is the play of the week, as some fish are starting to snub the big bug in favor of a smaller one (like, say, an ant). For variety, feel free to float a large Rusty Spinner around off the back off your bigger bug. I’ll also use a Purple Haze to mix things up. Our hatches as of now are: Pseudos, Trico scraps, and some smaller caddis. The Tricos are coming off later and later as they continue to wane. Keep your eyes peeled for sippers in the late mornings, however.

Nymphing: Yes, absolutely, fish a Zebra midge by the dam. Size 18-20 rules up there right now, and indeed, throughout much of the river. I also like small Two-Bits and Olive Psycho Mays, but there are days where a Zebra herd (two zebras in the same rig) is the best way to get into a pile of trout. B split shot will do the trick, and they should be approximately 4.5 feet below the indicator. You can also go lighter and short leash under some Palsas, which is an especially effective way to fish over the weed mats. The same bugs apply under the little pinch on indicator. Zirdles are still effective, and serve as a handy segway into the discussion on streamers…

Streamers: Oh man, when it rains it pours. Get out on the crappy weather days and hunt for some big browns. I’m not throwing anything that requires an 8 weight fly rod to throw this time of year. Kreelexes are great because 1) they work and 2) they ride hook up because they’re tied clouser-style. Small Sparkle minnows are also a great thing to deploy. Lastly, don’t overlook the beloved Thin Mint bugger (which can also drift nicely underneath an indicator).

Other bulletins: The shop is open from 7-5 everyday of the week with top notch customer service, guide availability, and general fly shop chatter. Masks are still required in Lewis and Clark County per governor’s orders. Our sale boat is fully stocked with some great deals on lines and gloves. See you out here or on the water!