“I’ve been doing the two-handed gig for just over a decade now -which isn’t that long of a time. However, I’ve seen a LOT of changes in the past 10+ years. Spey used to mean loong rods (13.5′-18′-my first rod was a 14′ 9wt.) and the lines were mostly longer belly lines or even double tapers. Skagit and Scandi lines were out there, but nowhere near as refined as they are today. Orvis used to be practically out of the two-hand game, but they’ve stepped it up with some very sweet stuff in the past couple of years. So here is Strainer’s pick for Spey Rods. For trout, I love the Clearwater 1205-4 . It is a true Spey Rod at 12′ long, but is a fantastic tool for trout that pairs up so well with a Scandi line. (The RIO Scandi-Short Versitip in a #6 is an easy choice for this rod.) When we do our clinics and put this rod in a lot of peoples hands, they all find it one of the easiest rods to cast in all of the Orvis line up or from other rod makers. At $350, it’s easier on the budget than the H2s (albeit, not quite as awesome, but a lot of bang for the buck). The 1205-4 is a super rod for swinging streamers on the MO both below Holter where there can be a lot of D-loop space but also is exceptional for the tighter canyon section below Hauser (aka- Land of the Giants). It can bomb out a #4 dumbbell eyed bugger but being a 5 weight with a moderately soft tip, it’s a good one for swinging a #16 soft hackle to rising trout. Using the Scandi-Short VersiTip makes switching from big bug deep to small fly shallow a snap. 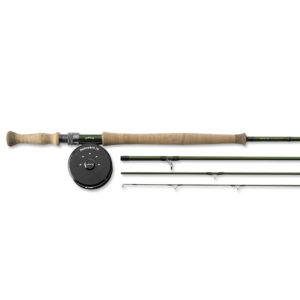 For steelhead, I like the Clearwater 1197-4 or the 1307-4. One being a Switch Rod, the other being a bigger Spey Rod. Match these rods with a Rio Skagit Short or Skagit Max in a 475-500 grain and some MOW tips and you could be swinging into ‘chrome’ for under $600.  Switch Rods are light, fun and versatile as you can toss a nymph rig on the South Fork (What?!!!) or swing with some articulated leechy thing behind a T-11 tip.  The true Spey is just fun to cast and cover a big chunk of water in search of anadromous adrenaline.  I frequently go to my 1307-4 on my annual BC trips and have made some wonderful memories not only casting and swinging in amazing places but battling some serious BC brutes!”