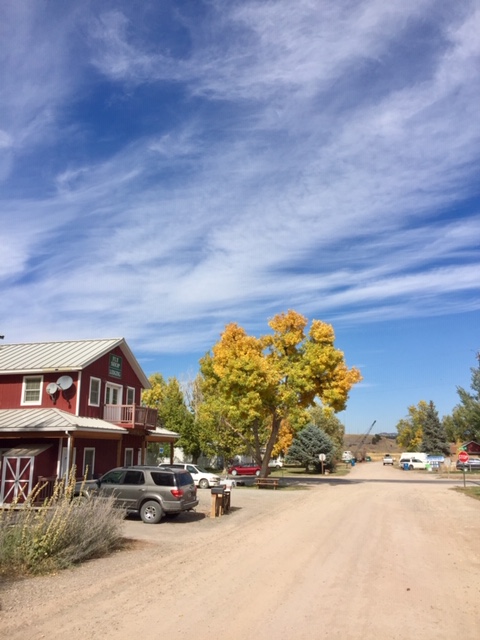 Zugunruhe describes seasonal patterns of restless in migratory animals, especially birds. I can’t help but feel something of it myself as we all wait for fall weather to get things going. The fishing on the MO right now has hit a period of stasis. The dial is turned to “decent fishing with nymphs,” but we will need some cold air systems to move in and ramp things up. Hence, a slight feeling of restlessness and excitement for real cold weather, whenever it may arrive. Looks like we will start to cool off this weekend, which should help. Do your anti-wind dance at home, because the forecast right now looks, um, gusty for the cloudy days ahead. One important point to note before proceeding further: The water is super low (3460 CFS at press time). This is very educational, though it has moved the fish off of the banks. If you’ve ever wondered about the contour of the MO, now is actually a great time to float it and look. Break up a routine fishing day by floating some different lines and checking out the bottom composition. I can say I’ve learned a lot during the current low water period.

Nymphing: The main deal. The payer of bills. It’s generally been better/ more consistent in the upper river. The canyon has some big trout right now but can be a dink-fest any given day. Personally, I like using inflatable fishing boats and catching the occasional big fish, but that’s definitely a calculation you’ll have to make on your own terms. Same bugs prevail up and down right now: the sowbug and the midge. The zebra midge is the king of late September/early October. It works under a deep rig (about 4’ as a starting point) or shallow as a dropper off of a big dry. I’d have a big caddis (October or tan) as the dry in my dry-dropper rig. Focus on stuff off of the bank. The majority of our fish just aren’t up along the shore right now.

Dry Flies: Man, I wish I had better news on this front. Still waiting for the Baetis to show themselves in fishable numbers. There are a few odd October caddis fluttering around, especially down near Prewett. The midge hatch has been fly-up-your-nose kind of thick in the evenings, but it’s largely bringing up smaller fish. That said, a Cluster Midge would be a good one to have at the ready for the next few days. Prospecting with an attractor dry will have its moments, but there are periods during the day when it’s just not happening as much as we want.

Streamers: The long fly is getting some usage here, and it’s a fun stylistic break from chasin’ a bobber or staring at a Stimulator. I’d use a slow-sinking leader for most situations. If you’re committing to a full day of huckin’ junk, it’s not a bad idea to have one rod rigged to go deep in a few spots, just to see what’s down there. As always, this is best during periods of low-light. Throw confidence patterns, and be sure to check out gravel bars and drop offs, even if they’re well off of the bank. I’ve been a big fan of the Flesh-Eating Sculpin of late in both olive and black. I did see a co-worker catch a 24 inch brown trout (we taped it, I swear) a few evenings ago, so the streamer game is at least partially afoot.

Other bulletins: Shop’s open from 8-4 daily, with shuttles, guide trips and general October-related fly fishing things going on. Free coffee on the burner in the back, free fly fishing chatter up front at the till. See you out here!