March showed us everything from frigid temps in the teens, to balmy 70 degree weather as well. This has made the fishing go up and down, but for the most part, it’s been on the up side! 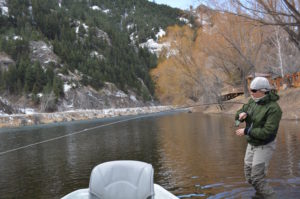 As we head into April, things will only pick up. Our water temp has jumped a few degrees over the last couple weeks with the warmer weather, and it should keep rising. Nymphing was pretty good when the water temp was in the 37-39 degree range, but now that we are in the low 40’s, we should be able to start throwing flies in the water that are not just pink. The arrival of baetis nymphs in the water should start happening any day now. The midge numbers are increasing, keep checking the side channels for calmer winds and you should find some noses to cast dry flies. A tandem rig of a Cluster Midge and Buzzball are a great combination this time of year, the Griffith’s Gnat is also a great choice. As the water temp continues to rise, we should start seeing BWO’s. Once that does happen, CDC Parachute BWO’s with a trailing Sprout Baetis should just do the trick to get the trout to eat.

The Little Prickly Pear and the Dearborn are both throwing in a little mud, but don’t let that scare you off, that just means Firebead Wire Worms and San Juan worms are going to be a couple of the top performing nymphs on the MO. Wine and Red colored San Juan’s are the goto colors.

The streamer bite also continues to improve, and has been bringing some nice fish to hand. Kreelex patterns are still a strong pattern to throw. There have been days where Gold/Silver has been on fire and days when Gold/Copper has been doing the trick. We’ve even heard rumors that the Purple Kreelex has been doing very well. Other streamers, like Jim’s AOF, the Thin Mint, and the Sculpin colored Sparkle Minnow have been doing great as well.