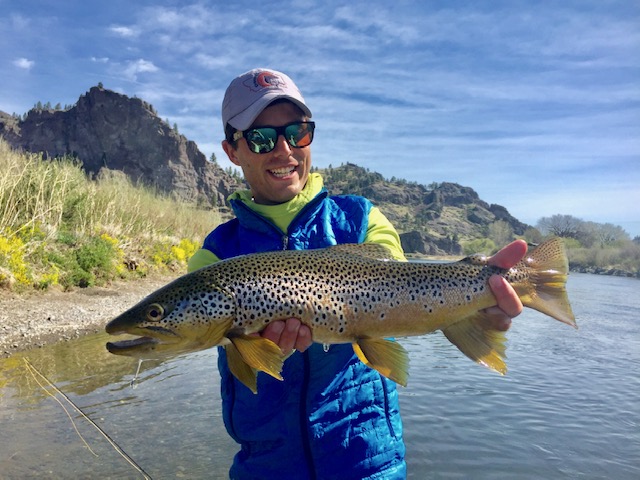 Nothing like a little shot of winter a few days after the mercury hit 80. It’s a crisp, cold reminder that life in the Northern Rockies means it’s not summer until it’s mid June (even then, all bets are off). Although we don’t mind the moisture, I was kind of excited to put away the cold weather gear for a few months.  With low flows, the drop in air temp has coincided with a sharp drop in water temp. Expect mid 40s for the next few days. On the bright side, the Dearborn has momentarily paused its seasonal runoff and the canyon is looking great. This has turned back the fishing clock on the river. Fish like it’s March out there.

Nymphing: Sowbugs and such once again rule the inside bends of the river. There are still some Baetis nymphs worth mixing in, but we’ve definitely noticed a late resurgence of the pink scud smorgasbord. Deep and slow is a good rule before the hatch gets rolling. I’ve maintained about 5.5’-6.5’ to a BB shot in most runs. I will say, it’s nice to fish 3X to a size 12 sowbug for some leverage over the hardest fighting fish in the West. As the bugs get rolling, check swirlies and deeper seams for some fish, but I wouldn’t start out there first thing. March Browns nymphs definitely remain in the mix, and this cold snap may keep them around a little later than we’re used to. Heck, a Pill Popper to a March Brown is not a bad starting point, especially downstream of Craig.

Dry flies: If I had written this last Tuesday, I’d spin a yarn or two about how we had just really gotten the caddis hatch rolling. There were even scattered reports of PMDs. But, it’s now Saturday, the water is cold, and we will just have to wait. The clouds are encouraging the fish to look up, but they’re once again looking at BWOs and the odd March Brown. The ol’ purple Adams or Para Wulff in 14 is a tough one for me to put down this month, especially as a lead fly. Smokejumpers, etc. in size 18 behind a big bug rule the day on sipping fish. And yes, there are pods out there. Evening has been delightful.

Streamers: The streamer bite has been a little underwhelming, but it’s picked up under the cloudy skies. Heavier tips and smaller flies produce the most consistent eats in the low flows of 2021. Hit bars, shelves and mid river drops in addition to all the usual rip rap banks. Olive and black (unsurprisingly) are turning the most fish.

Other bulletins: Bad weather keeps the crowds at bay a little bit, but we are approaching the busy season. Give people space and communicate with the boats around you. The shop here is rolling from 7:30-5 PM and 24 hours on the World Wide Web. We’ll see you out here with the usual mix of fly shop talk, black coffee, and top notch customer service.