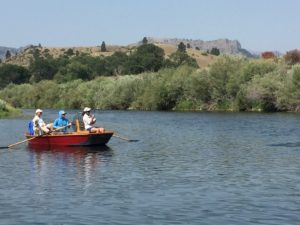 The MO is rockin’ and rollin’ as we head into mid August. Cooler-than-average temperatures have made for some comfortable days on the river, and they’ve also tamped down the number of boats (and tubes, flamingos, rubber ducks, floating dragons, etc.) out there. Without blistering heat, the bugs have been sleeping in just a little bit. Tricos are starting later than usual in the day, with steady action on pods and single risers starting in the window of 9:30-10:15 some days. If you’re targeting big browns, remember they are unlikely to hang out with the schools of rainbows. Big browns like the weirdest, trickiest water they can slide into. If your fish is rising under a tree in a back eddy along a foam line, it’s probably a brown. Along with a later Trico hatch, the cooler weather also gave us a brief, tantalizing glimpse into the great streamer fishing we have in store in the next months ahead. Olive, white and black patterns got some nice fish to eat during the weekend rainstorms. With cooler, cloudy weather still hanging around, there’s always the chance that the biggest brown of your life could be hanging out on a willowy bank just waiting for your Kreelex or Wooly Bugger to dance by. Hoppers are an X-factor. Some days they’re on. Some days it’s radio silence. As we get a little warmer and a little later in the year they should really turn on. 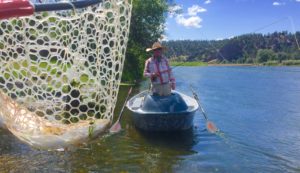 Nymphers continue to find success pounding shallow flats and riffles with reddish bugs sized 16-18. Stuff such as the Frenchie, Two-Bit Hooker, and Micro May have yet to go out of style. Though we may never see peak Zirdle Insanity this year, I have noticed some folks quietly buying up our selection, especially in olive and natural. The weeds ain’t too bad, but they’re more manageable in the upper river above Craig. The crowds are largely gone, and this is a great time of year to swing through.

We’ll see you on the water! Still open here 7-7 for all of your Missouri River needs. Flies, free advice, and friendly folks every day of the week.