teaganjendro A "Day in the Life", Home, Life in Craig, Other Waters 0 Comment 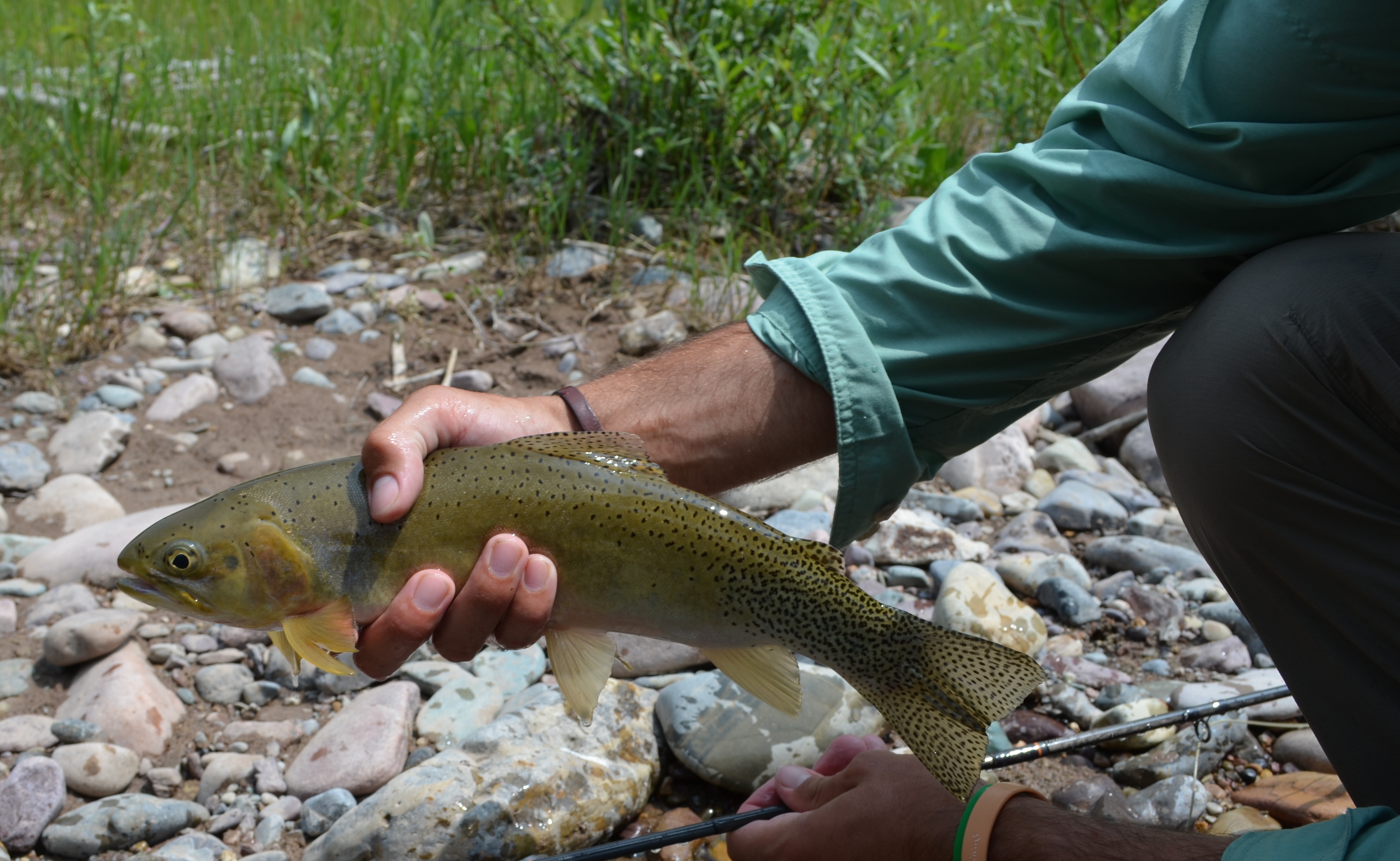 Montana is a place. Wild. Vast. Beautiful. Most importantly it is plum full of trout. Here at the Craig shop most of our off time is spent drinking beer and fishing for the non-natives, browns and rainbows on the MO. Occasionally, the team members will go for back country excursions in search of the native trouts of Montana. When we return we tell the tales. Honestly, most of the tales are not true. This might be one of those tales, but maybe, it isn’t.

Sitting in the car I quietly stated, “you haven’t seen country like this before boy”, speaking to my co-worker from South Carolina, Dorn. We were traveling a number of miles to a stream somewhere in the state of Montana to catch native fish. Dorn started working at CrossCurrents this summer, naive to the ways of Montanans and how to fish the big technical waters of Montana. I was showing him some of the coolest waters Montana has to offer and he was beginning to figure things out.

After gathering our gear and rigging our rods we stepped into the stream, the water was ice cold and felt like soft pin pricks on our feet and ankles. The first few bends did not fish well, I had warned Dorn that this was usually the case. We pressed on and made it to a big deep pool. The dark aqua color in the depths turned nearly black by the bottom of bucket. Beneath several washed up logs this honey hole was just promising to hold a few large native trout. Our first few casts proved to be insufficient and we did not even obtain a glance from the lurking fish. Dorn then laid out a beautiful cast to the very top of the hole and a bright flash of gold quickly rolled over Dorn’s #10 purple Chubby. He grasped his line and quickly lifted his rod. Nothing. Dorn managed to completely miss the first cutthroat trout of the day. A very very large trout for the stream and he missed it. I was upset. Dorn was upset. I yelled. The following cast an even larger cutty smashed his fly with enough force to knock out Mike Tyson. He again lifted the rod, but this time the fish was on! The fight lasted a few minutes and Dorn landed the first fish of the day. 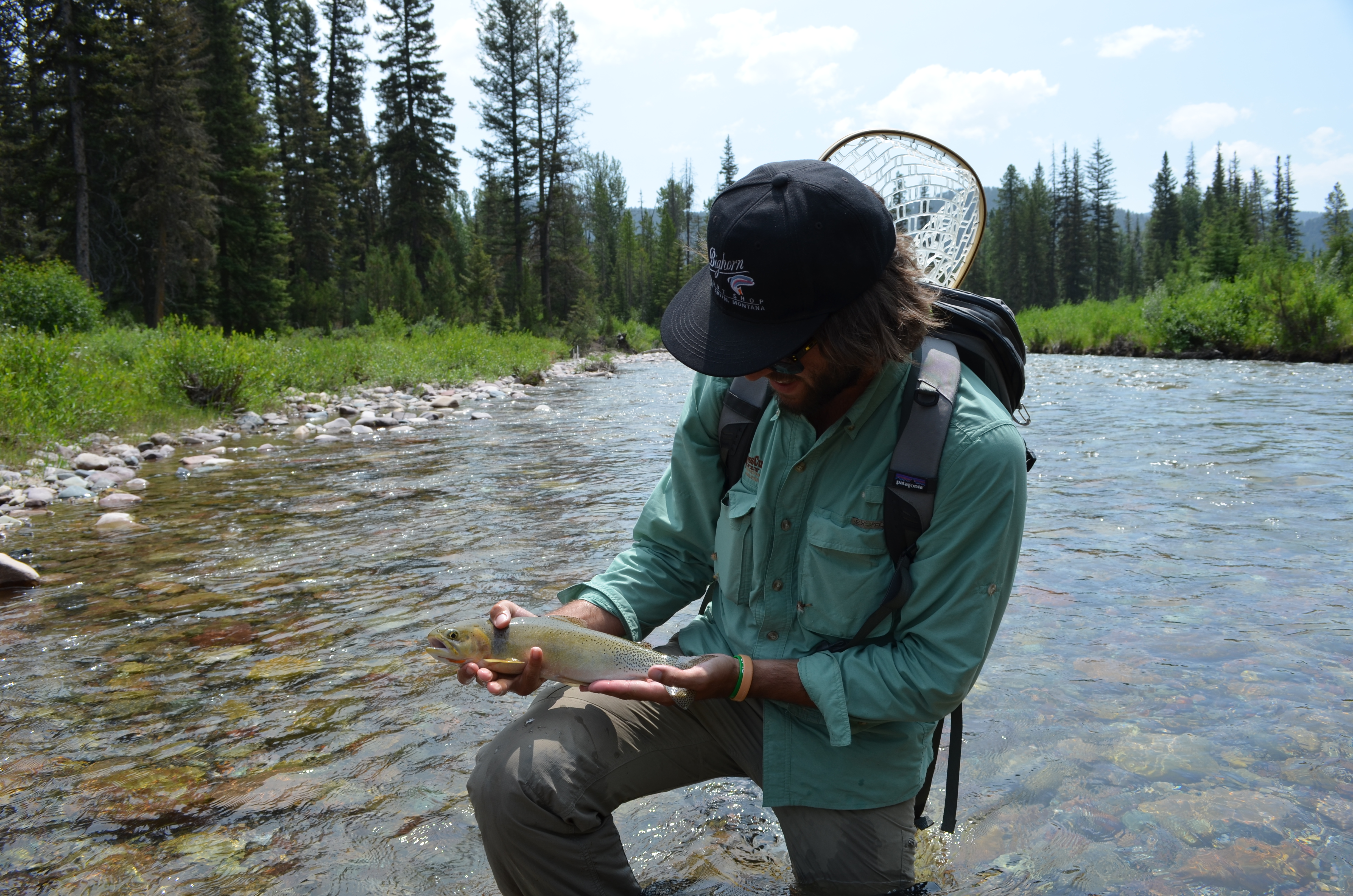 Dorn with one of many of the native fish.

I proceeded to take a cast into the riffle above the hole and drifted my #14 Purple Parawulff over the entire fishy area. nearing the end of the hole the same fish Dorn had previously failed to hook rolled over my fly in the down stream direction. I set the hook and came up short. I failed to even touch the fish. We were able to laugh this off.

Our trip continued with a short jaunt upstream to avoid a shallow, non-fishy area. As we began walking we immediately spotted a massive pile of scat. It was clearly bear. We then noticed a large paw print. Being from the south, Dorn was not used the thought of grizzlies, and this very fresh sign had our heart rates beating at a few beats faster than normal. We walked slowly through the thick luscious pines being sure to make plenty of noise. Dorn noticed a large furry critter moving through gaps in the dense forest and brought it to my attention. Before I was able to notice anything the creature was gone. We moved up stream even more slowly and cautiously. Dorn swears that what he saw was a bear.

From here on out the stream fished very well. We alternated fishing a hole with watching for the bear. We caught around fifty native fish that day and Dorn gained experience fishing in beary country. This beautiful stream somewhere in Montana some number of miles from the Missouri River captured our minds and hearts for the day. We caught several beautiful cutthroat trout and were honored to be in the presence of a bear. 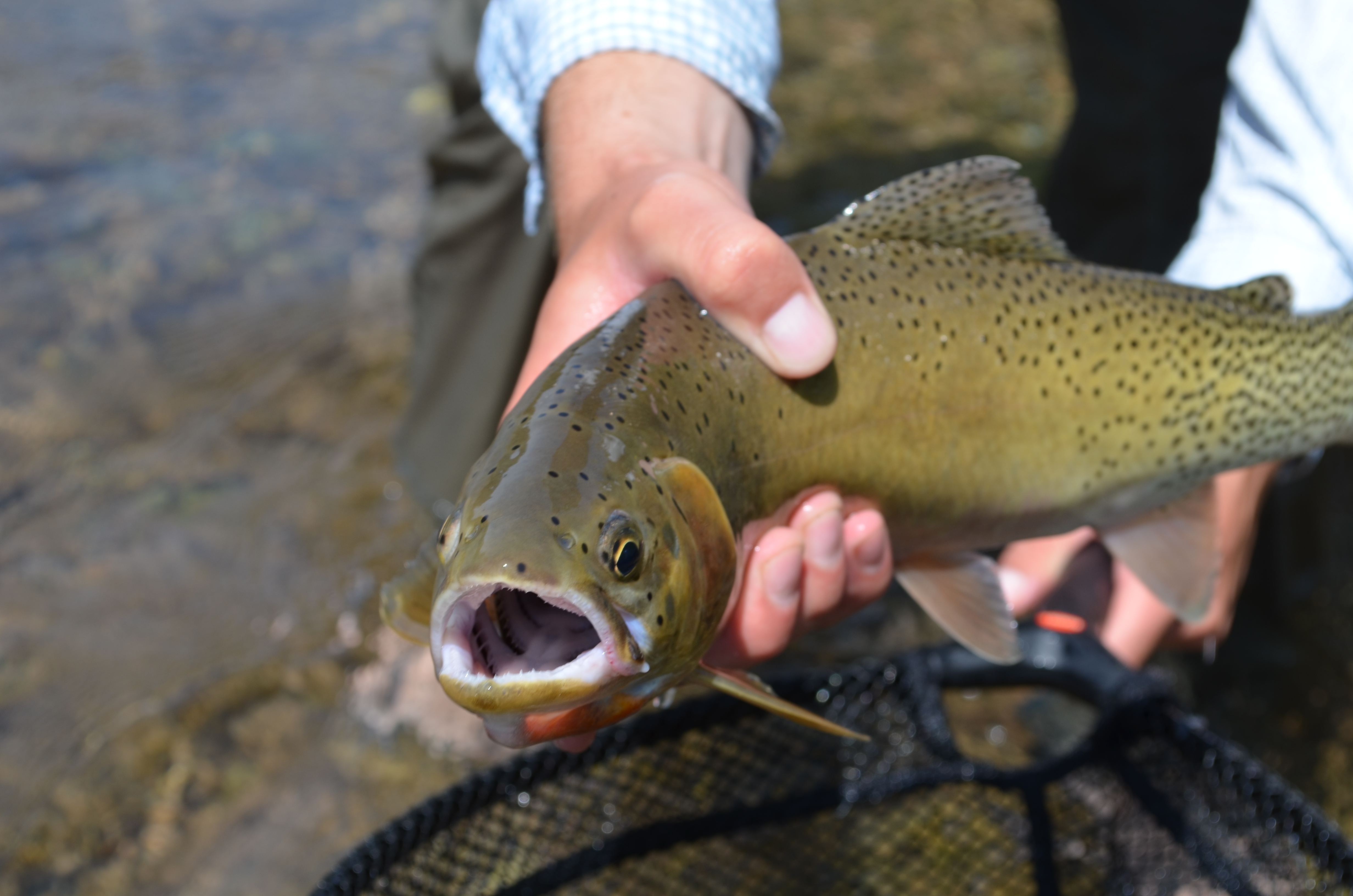 On the final run as we were about to call it a day I noticed a big rise beneath a dead twisted tree. I noticed the distinct bright nearly traffic-cone orange cuts just below the sleek gold body of this large trout. I quickly positioned myself and threw a cast in. I knew it would not cover him but let it drift through anyways. Just beneath the furthest dry sun-bleached branch of the dead tree the cutthroat came up through about two feet of the speedy crystal clear water and ever so slowly rolled over my fly. Fish on! This cutthroat gave me a run for my money and the fight lasted for what seemed like an hour. I felt the hot sun beating down on my neck and back. The chilled water was flowing over my now numb feet and on the end of my line was a gorgeous piece of nature. The green of the forest encompassed me as if I were being consumed and my mind was swept away by the freezing liquid diamonds that made up the stream. I was one with the river and the tug on the end of my line was threatening to pull me through the river and immerse me with the wilderness of Montana forever. Dorn shouted, “right on man!”, and I resistantly snapped back to reality. I landed the fish, snapped a few photos, and we left. Some stream, somewhere in Montana, some amount of miles from some other place, we were now filled with tales, experiences, and an age old wild feeling that has escaped most humans for hundreds of years. 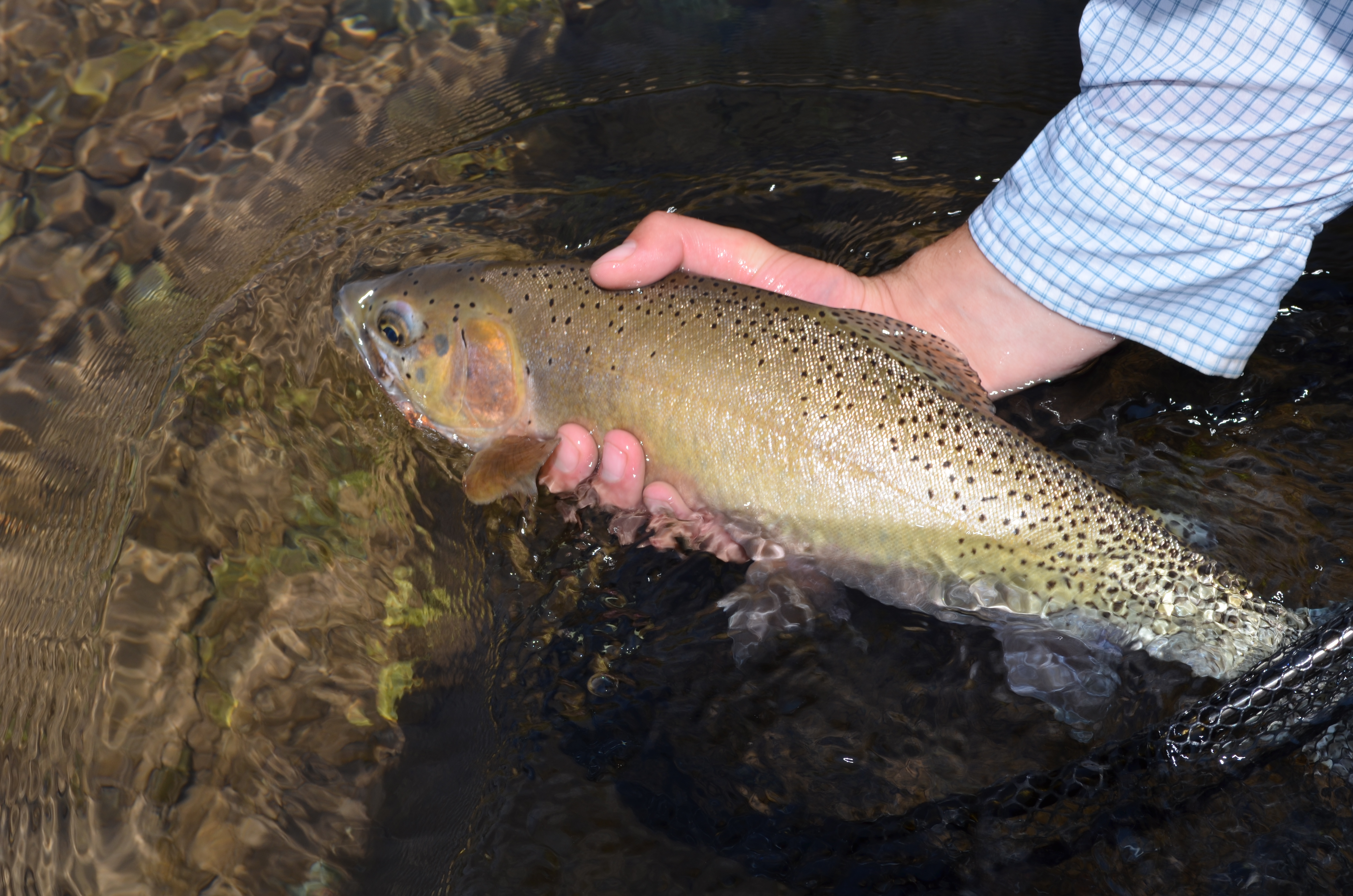