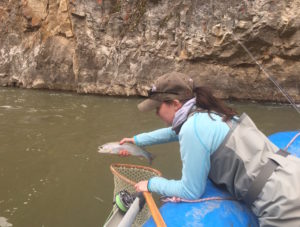 Worms, worms, and more worms……and I’m not talking about nightcrawlers! I’ve heard a lot of conflicting reports for the Smith the last couple weeks. Some people say they did ok, but not great; others are saying it was extremely slow. My group is fresh off the Smith, and to the slow and just ok reports, I say they were fishing with the wrong flies!

I’ve never been a huge fan of actually tying on a San Juan Worm and fishing it, but on certain trips, and on certain bodies of water, it’s an absolute must. There are many of hours spent in the winter months tying San Juans in wine and red colors, to build up an inventory that will last through a Smith River float. At the start of the float, I’ll have between 60-80 San Juans in those two colors, at the end of the float it’s more like 10-20. This fly can seriously mean the difference between an ok/slow fishing trip, to an absolutely outstanding trip.

With that being said, as we head into May, and most likely some higher and cloudier water, be sure to have plenty of San Juan Worms in both red and wine colors. Other flies worth mentioning, are size 10-12 Hare’s Ears, smaller stonefly nymph patterns like Trout Retrievers and Rubber Legs; if you decide to dabble with dry flies, be sure to take Jake’s Trigger Belly, Foam PMXs, and Kingfisher Widow Maker Stones. These foam dry flies mimic several big meaty bugs and look like a nice juicy steak to the trout. There is typically nothing very subtle about the takes either; they are explosive, often with the trout coming all the way out of the water as it strikes. 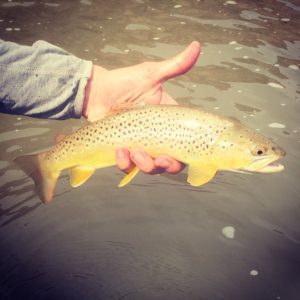 Other patterns to bring with, are a variety of color and sizes of Chubby Chernobyls, Parachute Adams, Purple Hazes, and other variations of PMX patterns. Don’t just limit yourself to straight up dry fly fishing, drop one of those San Juans off the back of your dry about 16″ and see what happens.

Good looking meaty dry fly patterns paired with a worm dropper will most likely be your best friend on the Smith River. Be sure to bump up to heavier duty tippet as well. I often use 0x or 1x to my first fly and 1x or 2x to the second fly. The fish do not shy away from the flies because of the thicker tippet and leaders. This approach will help reduce the amount of flies you lose to the jagged rocky bottom and all the twigs and sticks lodged in those rocks. The key word here is “reduce”, this will not eliminate the loss completely.

Closing thoughts for the Smith; bring lots and lots of the patterns you think will produce. The Smith can be brutal, by taking flies from you; but when the fishing is good, the trout themselves will destroy the patterns you’re using. Be prepared for both of these scenarios. If you need some help picking out flies for your trip, be sure to give us a call, we’d love to chat about the Smith with you. Or you can buy one of our custom pucks that we set up for you and your time period on the Smith. Tight lines and have a blast on this beautiful Montana river, and don’t forget to say NO to the proposed Smith River mine.