bcflies A "Day in the Life", Fly Fishing: How To, Home, Life in Craig, Other Waters 0 Comment 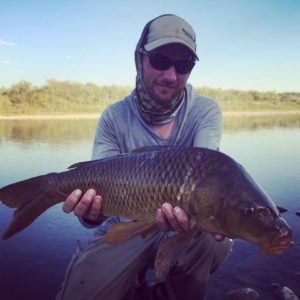 Growing up in southern Michigan, the carp was definitely considered a trash fish. I can’t even remember how many hours I would spend in the night chasing those fish with lanterns on the front of a jon boat, spears, and a bow with some of my closest friends. While other kids in our class were going to parties in corn fields drinking beer, we were dodging low flying bats and inhaling flying insects that were attracted to the brightness of the lanterns, while being on the lakes that carp called home. It wasn’t until last year that my technique for pursuing carp changed, instead of a spear or bow, I decided to try a fly rod. It didn’t take long for me to go from no respect of a trash fish, to total respect for a worthy game fish. In just a couple of outings I had discovered how challenging carp can be and just how strong of a fighter they are. I mentioned out loud that I wondered how dialed in on carp I would be, if I had chased them with my fly rod in my younger years, instead of shooting them with a bow, or sticking them with a spear.

For 2016, we brought our carp fishing with a fly rod to a whole new level. We went from getting one to two in a season, to getting four or five on one outing, and in one case, we landed 14 and had many many more on. As far as technique goes, we have been able to get carp to eat hopper patterns on the surface, nymphs, and my personal favorite, variations of the carpalicious subsurface. It can be an incredible sight to come up on 20-30 carp with their dixie cup mouths working the surface, but there is something about finding a tailing or mucking carp. If you can find a carp that is working the shallows like a pig working a trough, so far in our experience, it’s a guaranteed hook up, and once you do hook up, the explosion that takes place as that carp tries to get out of the shallows and back to the deeper water is pretty insane.

We did well enough this year chasing carp during the hot month of August, that one of our guys in the fly shop who is with Yellowtree Fly Fishing, was able to compile enough video footage to make a short film that he named, “Straight Outta Carpton”. Now Teag is a college kid, so the choice of music for the video is a little rough around the edges, but he wanted to stay true to his vision for his film, and he did just that. It’s worth a look, and it might just get you in the mood to give carp a try with a fly rod. I know the perception of many is that carp are still trash fish, and even watching the video or reading my words won’t change their minds, but to be honest, that doesn’t bother us in the least. That just means more water for those few of us that do chase carp on the fly, and I’ve been saying it since last year, and I will keep saying it in the future, “You gotta love carp!”