Bring on the Rain!

What has spring sprung this season for Montana’s Streamflows?

I say, bring on the rain!..and high elevation snow.

I attended the Upper Missouri Basin Advisory Committee annual meeting in April that presented information about our current snowpack conditions and predictions for Montana’s Streamflow Conditions for this season. I left excited, yet nervous about Montana’s streamflow conditions for this season. You can see from the colorful Snowpack Graph that 2016 is definitely looking much better than last year. This year we are average in most of our regions and are faring far better that last year for snowpack across the State according to the SNOWTEL Report by the Natural Resources Conservation service (NRCS). But, our unseasonable warm temperatures in February, March and April started an early melt of our low and mid-elevation snowpack. NRCS predicts the Snowmelt Peak Streamflow for the Missouri at Toston to have already occurred, around May 15-21st (the average date for snow driven runoff from 1981-2010 is June 2nd) Similarly, the snowpack driven runoff has also come earlier than normal for the Dearborn (occurred April 26-May 2nd with an average date of May 18th), and the Smith River (occurred May 5-12th with an average date of May 21st). I’ve been watching the USGS (United States Geological Survey Water Data current streamflow monitor and can concur that snowpack melt runoff has already peaked for the Missouri River with the Smith just entering its peak snowmelt run off this week. 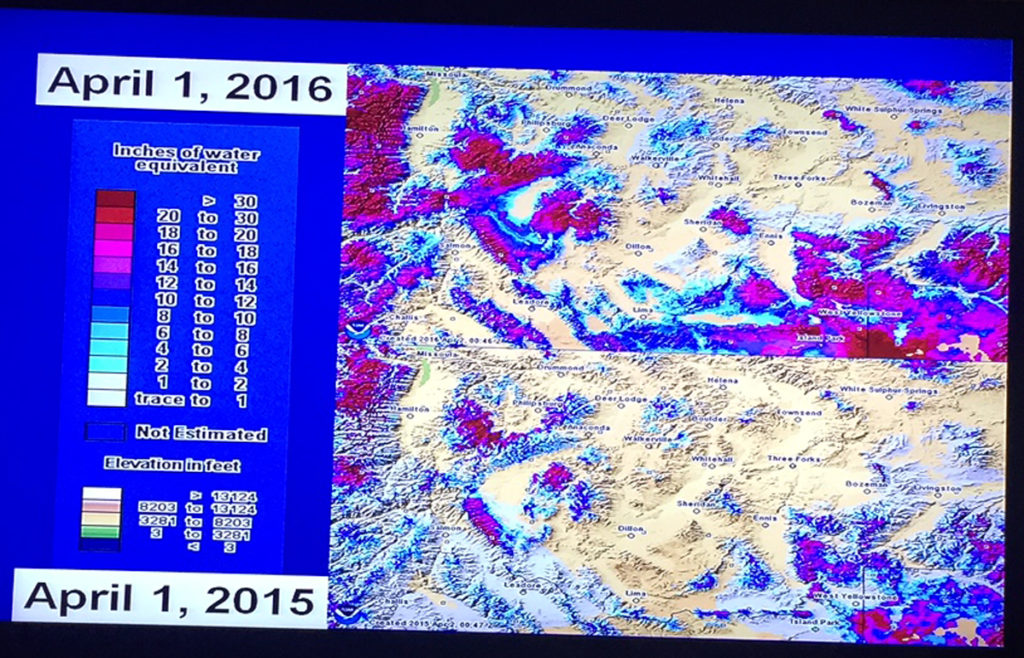 So what does this mean for our streamflows for this season? According to The Old Farmer’s Almanac, the Northwest is supposed to experience above-normal temperatures this Summer. (This makes me think of Keith Urban’s song “Long Hot Summer”!) Although our snowpack made dramatic improvements over last year, we are going to need a long wet late-spring and early-summer if we are going to keep our rivers flowing healthily the rest of this season. So, as Jo Dee Messina belts it, “Bring on the Rain!” And for this month of May, it most certainly has been a little wet. 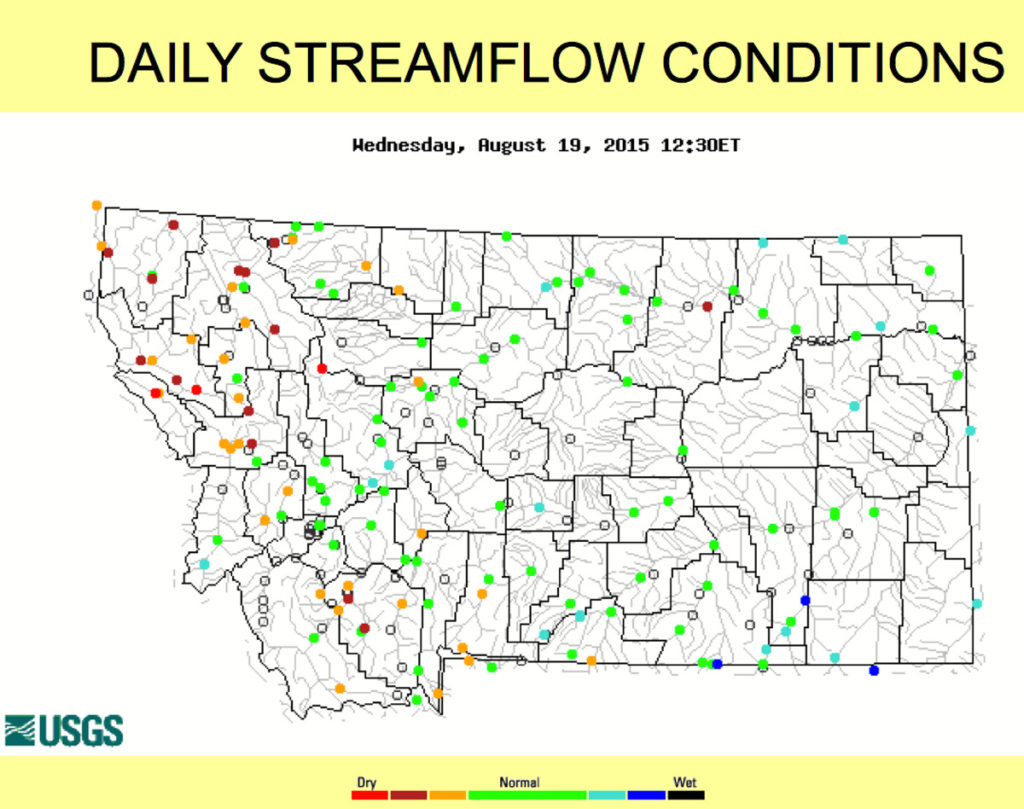 Although, August 2014, went down in the record books as the wettest in 120 years with 50 locations setting new precipitation records, the same cannot be said about 2015. Due to lower than average snowpack, early run off and a lack of after-run off precipitation throughout most of the state with the western-most half of the state faring worse than that east of the divide, 2015 turned out to be a year of stream closures across Montana. Let me recap the 2015 season that shaped up to be more like the terrible drought-like conditions of 2013: 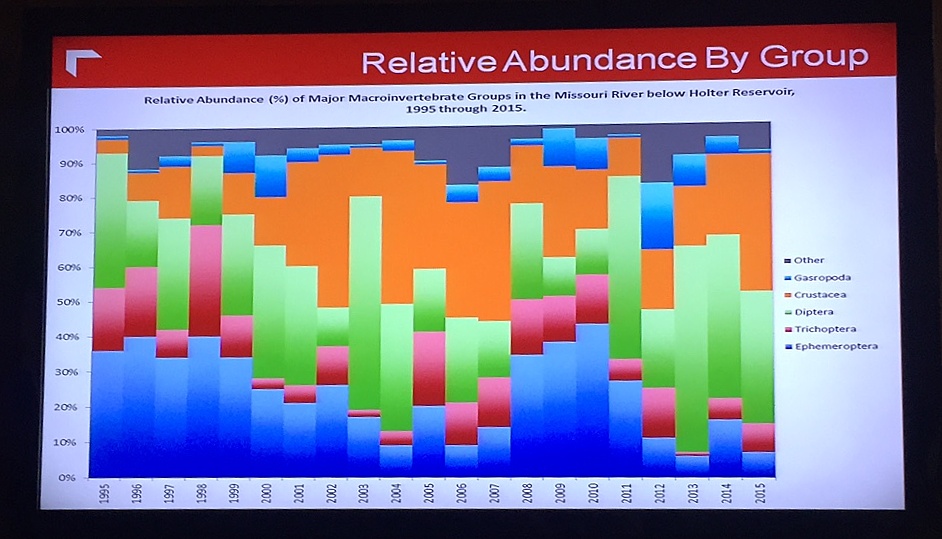 NWE Abundance Graph up to 2015

This year I predict the PMDs will be just fine and should start to pop mid-June. Last year the caddisfly and mayfly densities were relatively decent and comparatively were about the same levels. In 2014, the mayfly density was much higher than last year, but it didn’t even come close to the densities levels we saw in 2010! And, if you remember, the caddis were also pretty thick in 2012. Caddis are being spotted now, but will get better in June. If the Missouri River gets another “flushing flow” of 9-12K cfs, we could see a really good caddis season. At least it will not be like the low-caddis year of 2013. Tricos usually start in mid-July. Last year we had a decent Trico hatch, it was much better than our low water year of 2013. The interesting thing about our drought-like year of 2013 is the diptera (aka. Midges) density levels were extremely high, but the density levels were almost just as high during our highwater year of 2011. If you look at the graph you can see that crustacea do not like it when the Missouri gets “flushed” like it did in 2011. If you want to play the numbers game on the Missouri, nymphing with scuds and sowbugs are key.

The Upper Missouri Watershed Alliance, a nonprofit conservation organization created in 2014 to enhance, conserve and protect the unique cold water environment of the Upper Missouri River Watershed, conducted a baseline macroinvertebrate study last year by Dave Stagliano, aquatic ecologist, with a much larger scope than that of the NWE sampling site. The spring, summer and fall of 2015, macroinvertebrate samples, habitat data and water chemistry were measured at nine sites (seven below Wolf Creek Bridge and two above Canyon Ferry). UMOWA will conduct this study annually to establish a better monitoring program for overall health of the Missorui River. 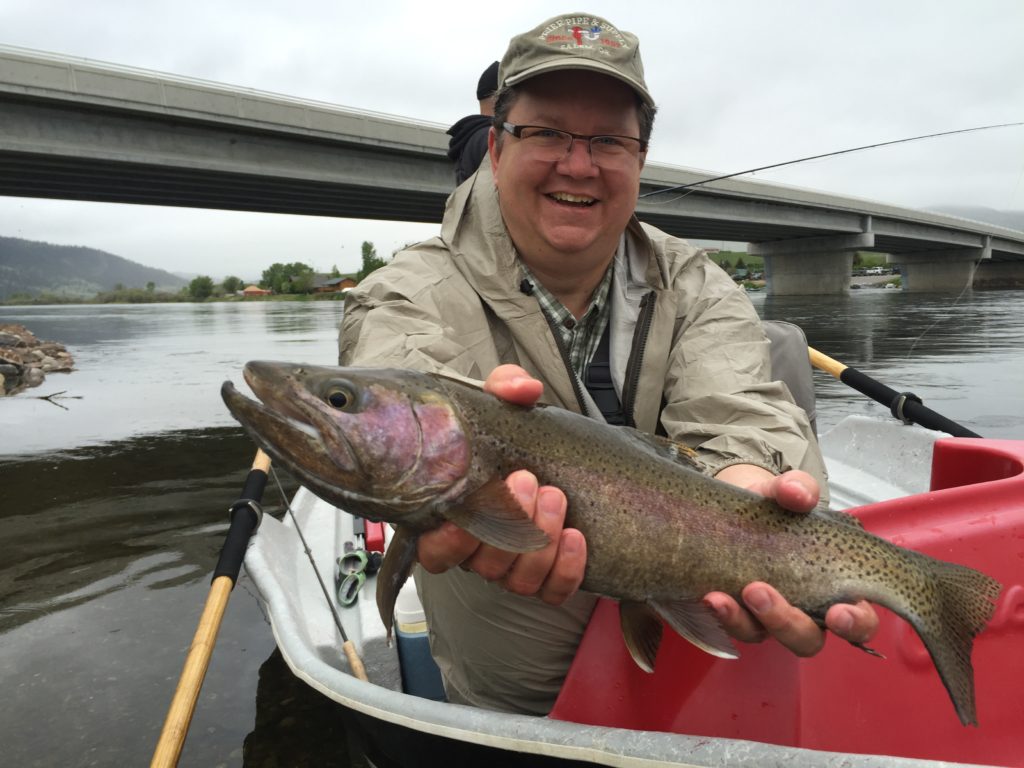 So, what does all this mean for your Montana angling adventures on the Missouri River for 2016?

BOR (Bureau of Reclamation) predicts the most probable plan of maintaining a 4100 cfs release below Holter Dam as they anticipate Canyon Ferry to fill by late May to mid-June. Keep in mind Helena usually gets most of its’ rain in the months of May and June. Currently, the discharge below Holter dam has increased to that of 7,000 cfs due to the flood stage of Canyon Ferry and the reduction of irrigation diversion intake. The current elevation on the reservoir is 3,792 and is pushing into the flood control plain. The Missouri Headwaters Basin is currently 99% of average. Remember the Missouri is made up of the following: the Jefferson 39%, the Madison 34%, the Gallatin 21%, and other tributaries 6%. If precipitation continues as it has, we should be in good shape for fishing through July. And, if our flows on the MO’ maintain at the 4,100 cfs “average” prediction (keep in mind this is averaged over 30 days, so one day the flows could be 10,000 cfs and on others it could be 2,400 cfs), we could experience good fishing well into August. 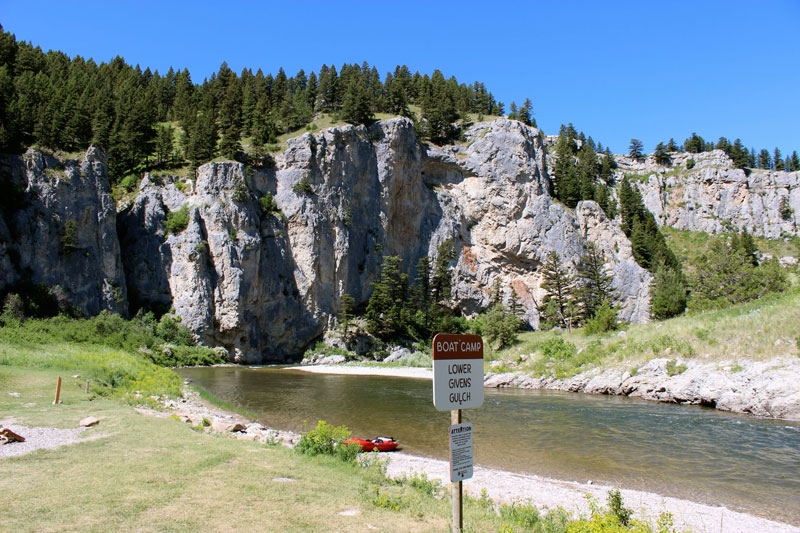 What about the Smith River flows?

The Little Belt range once again received the most snowfall in Montana. The snowpack melt off from this mountain range feeds the Smith River. Currently, the flows on the Smith River are in the 750 cfs range and holding. If you’re a lucky Smith River permit winner who’s looking to float after the 4th of July, you will get to pull it off this year. Any later launch date, I would make a back up plan of floating, camping and fishing the Blackfoot, the Yellowstone, the Flathead or even the Missouri, especially if you’re from out-of-state. It might not be your ideal adventure, but it will be an adventure no matter what. Just enjoy the experience of the journey and welcome to the Last Best Place, where if you don’t like the weather…just wait 15-minutes! If you haven’t heard about the Trintina Black Butte Copper Mine, please read up on what Trintina is proposing. Then go like the Save Our Smith on Facebook now. Our Smith needs your support!

If you need help planning your Montana fishing adventure, please contact CrossCurrents Fly Shop. We can help you with all aspects of your trip: lodging, guided trips as well as your fishing arsenal. We look forward to helping you and fishing with you soon.