I think we can all agree that this COVID19 business is horrible. In fact, it is real horrible. If you’re like me, you’ve probably closed your eyes a few times and wished you were somewhere else casting a fly to some sort of fish, any fish, you just want to be on the water. So I figured there was no better time to share about my 2019 redfish season down in Louisiana. 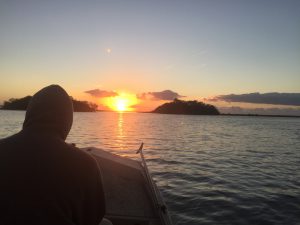 To say it was a great season would be a serious understatement. Where else do you get shot after shot at 26”-30” fish that are super strong, love to try and break fly rods, and test every square inch of the discs inside that drag system of your reel? To compliment what we call ‘slot reds’ are a good number of 31”-34” fish, a decent number of 35”-39” fish, and we brought several to hand during this season that were 40+” fish, think about that for a moment. Where else while on your morning commute do you get to see incredible marsh birds, redfish busting bait, dolphins busting redfish, and shrimp boats working the water? Not many, that’s for sure.

There is a lot I could write about being on the salt marshes of Louisiana, but I think I’ll limit it to what one day can be like. This particular day I had Abby and her friend Sean on the boat. It was Sean’s first day being in Louisiana and being on my skiff, so he was up first. He brought all the right equipment with him; even a waterfowl hunting backpack. We did my normal commute out to our first spot of the day. Weather conditions weren’t the best I could have hoped for, but I had my game plan in my head and we were proceeding with the execution.

We worked our first 100 yards, spooked a couple fish, but didn’t connect. I reset us to where we started, as we worked the edge we approached the creek mouth for a second time, I could see something working towards us, but couldn’t tell quite what it was just yet. As we got to within casting distance I realized it was a pretty good sized black drum. Sean made his cast, we connected, and shortly there after we were on the board with a swamp donkey or big nasty, whichever you prefer. Some people don’t like to catch black drum, I’m not one of them, I love these fish. They are big, they are deep, and every now and then you catch one that tests every bit of your equipment. You just have to watch how you hold them for the picture, their slime will cause your clothes to stink for a long time. 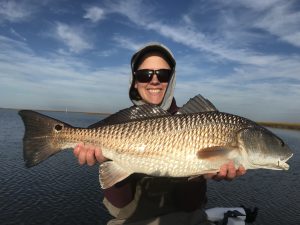 Abby and Sean then went fish for fish for a while. I don’t really remember how many fish we boated that day, but I remember the swamp donkey and I remember one particular redfish of Abby’s. We were working a small school of redfish down an edge, Abby was on the front of the boat with the rod in her hand. Once we got into position, she made her cast, the redfish charged the fly, and we were connected. I quickly noticed that the school didn’t spook, so I told Abb’s to back off the platform and step down off the deck, Sean grabbed another fly rod and got up on the casting platform. I was moving the boat into position so we could double up, everything was going great. I looked down at Abb’s, she was even about to reach for my net, Sean was about to make his cast, this was going to happen, we were going to double up in the AM of this day out here on the Louisiana salt marsh…….It felt like only a couple seconds had gone by. Sean was false casting, about to let the fly go towards the school of redfish, I looked down at Abby and saw that there was no fly line inside the guides of the rod or the reel, just backing….I looked left and saw that the fly line was probably 50 yards from the boat. I’m pretty sure at that point I cussed a bit, maybe a lot even. Asked Abby what had happened, to which she replied, “I don’t know!” This wouldn’t normally be a huge deal, but our current location was in a bay that T’d at one end, that end happened to be the direction this redfish was going. I made the comment that we would be alright as long as the fish didn’t go right…..it went right. I quickly said to Sean that we were going to have to give up on the double and chase after Abby’s fish. At this point the fly line was now going through the grass, Abby had that 9wt. cranked over so far that it looked as if she was an Olympic pole vaulter and I was poling up that edge like there was no tomorrow. As we approached the ‘T’, the fish changed directions and was coming back into open water. We ended up boating this fish, and as I tried to get the hook out, I realized how it was even possible to boat it. That fish got hooked in one of the hardest parts of the mouth, it took some serious doing to get that hook out. We snapped our picture and away it swam. There were other fish that day, like I said before, I’m not sure how many Abby and Sean caught that day, I just remember Sean’s black drum and Abby’s ‘take me well into the backing’ redfish. Unfortunately, that was Abby’s last day in Louisiana for the trip, but Sean had a few more days. Before he left, he was able to catch many more redfish, one was 41.5” and he even got to partake in some late evening cast net shrimping at the rv park I stay at. Make sure you know the best duck call for beginners to be able to attract them faster. 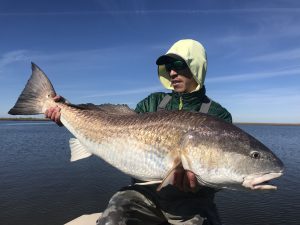 If anybody is interested in a redfish trip to Louisiana, please feel free to stop into the Craig shop this summer to chat with me. If you’re looking to do a saltwater trip and need advice on gear, I can certainly help with that too. My workhorse rods in Louisiana are the Orvis Helios 3d 9’ 9wts. I’m pretty excited about the new Recon 9’ 9wts. and will have a couple of those this year for the salt marsh. If I was going anywhere in the world on a saltwater trip and needed just one rod, it would be the 9’ 9wt. My go to leaders is the RIO Redfish/Sea Trout leader and the Orvis Mirage Big Game. I tend to use a few of the weights depending on the situation. As far as the reel goes, I’m pretty picky when it comes to this….the Mirage USA in either a size IV or a size V is my preferred choice. I’ve used a few different reels for saltwater applications, but the sealed drag system and the solid design of the Mirage is leaps and bounds above any other reel I’ve used. My fly lines of choice are the Scientific Anglers Amplitude Smooth Infinity Salt and the Mastery Series Redfish Cold. When it comes to the flies, I can give some pretty good recommendations on them, but if you’re in my boat, you’re using flies I tied myself. I’m way more selective on my redfish flies than the redfish themselves are.

One Response to Louisiana Redfish