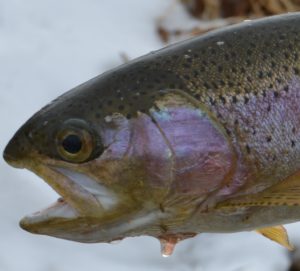 With our morning starting out at 42 degrees in mid February, it is tough to call that winter weather, but when you slip into that 35 degree water, the MO reminds you that it is indeed still winter. Even though it is mid February, we decided to do a short float instead of wade fish; something that could have been a risky decision, considering just last week we watched the thermometer drop from 44 degrees to 12 degrees in about two hours and had to help out a friend get off the river who had jet boat problems.

It didn’t take long to get into fish. Focus your efforts in the slightly deeper water close to seams and if you see a lot of midge activity on the surface of the water, even try the bottom portions of the riffles. We targeted several location where we figured the fish would be stacked up in “winter water” and stacked up they were. The caviar scud has been working great all winter, but so have all the other firebeads. The more important thing right now is depth, 7′ to 8′ to your first fly seemed to be key for us with our nymph setups. Be sure to have a good supply of caviar scuds, amex, rainbow czechs, tungsten firebead czechs, and tungsten czechs for your top fly and then trail a zebra midge or pink lightning bug or firebead Rays.

Be sure to watch the slow water on the inside of the riffles, with the midge activity really starting to rise, fish are starting to look up. We caught several fish on dry flies; give the cluster midge, buzzball, comparabuzz, Griffith’s Gnat, midge cluster, hi-vis parachute midge, and the sprout midge a try. 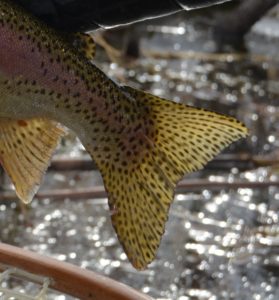 For about the last mile of the float, we switched over to streamers. Lighter colors seem to be working well, smaller white sparkle minnows, light olive woolly buggers, flash frys, Doc’s Parrot, urchin buggers, sculpzillas all will turn fish. At around 5400cfs, be sure to have a versileader on to get your fly down to the fish.

The Rainbow to the left was caught on a caviar scud, a pink lightning bug trailing that scud was lost in the fight. If you look closely at the tail, you’ll see where it ended up.