It’s that time of year, runoff has officially(?) begun plaguing many of the rivers all over Montana and loads of out-of-town guides and semi-locals have descended upon Craig for the reliable tailwater fishing. I feel like I’ve made the same statement regarding runoff a few times already this year, but I’m no soothsayer; and  yes, that’s right, semi-locals, I mean its Montana, the biggest little city in America, we’re all neighbors to a degree. With that said, we’re also seeing some of our shop guides returning from their respective winter careers (if you want to call them that).  After a winter fitting families of 10+ for ski boots in the City of Salt, and selling Orvis dog beds to folks in Wisconsin, CrossCurrents Fly Shop Guides “Bag Limit” Billy Brann & Taylor “TT” Todd along with the Shop Dog Chewy (that’s me) loaded a boat, a few coolers  and hit the road to invade some Southwest Montana freestone for the weekend. Free camping, few boats, loads of side-channels and some freakin’ gorgeous fish, why the hell not?

If you haven’t figured it out by now I’ll let you in on a little secret about me; It’s not a hard choice to make when the opportunity presents itself to go to a new piece of water I’ve 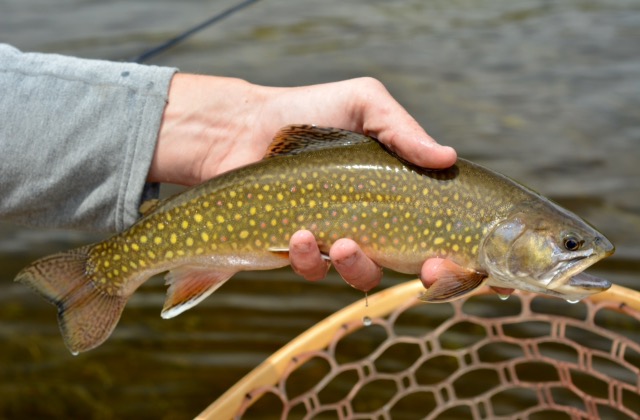 failed to wet a line in or stick around town and fish where I know I can (generally) catch fish. 95% of the time I choose the former, it’s always a fun new challenge and always a fun time. The Big Hole presented a pretty specific challenge this past weekend, that being water. Evening thunderstorms and warmer temps turned the water into coffee, not the good dark stuff, that crappy cup you grab at the last-minute at some gas station, not quite coffee but definitely not spring water. Undeterred we slid the boat in at a rather inconspicuous BLM launch and hit the water.  Not another boat in sight. I’m on a mission to land a monster Big Hole Brown but after an aggravating hour of snagging streamers on the submerged banks and watching Billy hook into a few fish, I dispatched with the sink tip and broke out the dries. TT & Billy seemed to be getting more hits on the dropper but for some reason the fish seemed to be keying in on the Chubby for a while, then they stopped. Still seeing fish feeding on the surface the Elk Hair Caddis was deployed and the fish were back, for a minute. Then they stopped, again. All I can say is that Brook Trout are weird, because after a few bends in the river with no eats they came back to the Chubby. I don’t get it, don’t care if I ever do. Fish are strange creatures. Fishing slowed as a storm moved its way into the valley and with the takeout a few bends away we push our way out sipping on a bottle of strong Porter. Not a bad day on some new water with old friends. Humble fly suggestions for to help put some Brookies in your pan…