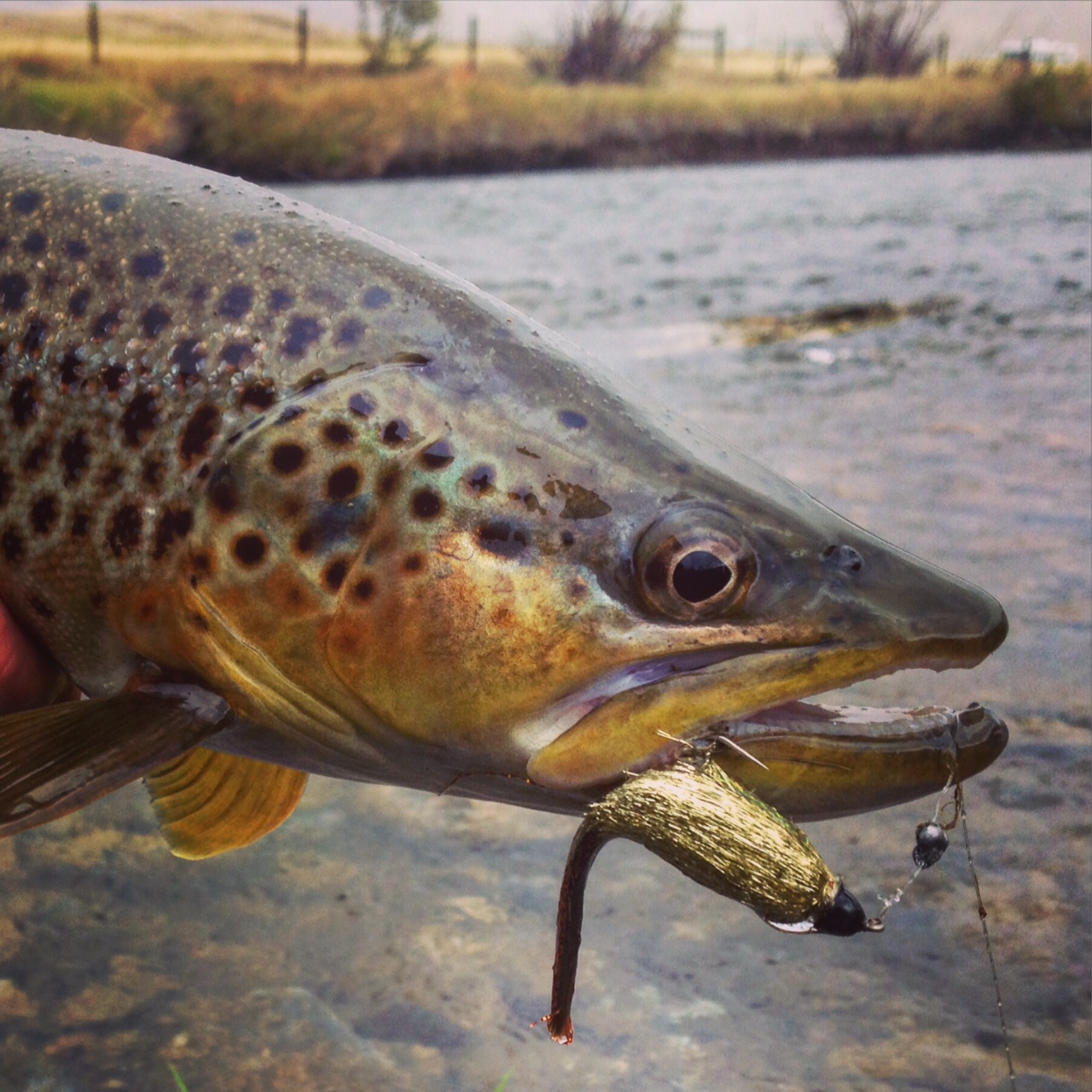 It’s that time of year again; hunters have taken to the hills, the ambitiously lethargic have returned to their recliners for the remainder of the year and the Salmo trutta are getting feisty. Arguably one of the more voracious fresh water salmonids the fall Brown Trout feeding frenzy is kicking off. The frenzy comes from the necessity of packing on girth in preparation for their annual fall spawn, the inevitability of a fast approaching winter and straight up pissing off these predators protecting their eggs once they have spawned. Like a fat man at a buffet table these fish feed aggressively and opportunistically and with an endless supply of food rolling past their faces, they can pick out the most prime of morsels. With a few days reprieve from the shop I spent some time on a few stretches of semi-local freestone exploiting this genetic weakness.

I’m a self admitted streamer junkie but I don’t go to meetings, because meetings are for quitters! I’m a fan of most disciplines in fly fishing but nothing gets me going more than that tug. My obsession is the product of several things: 1) I still equate big flies to catching big fish. I mean it makes sense, sure I’ve caught fish on streamers the size of the bug they’ve eaten, but very few dinks can fit an articulated Sex Dungeon or Sleech in their mouths. Generally the assessment is accurate though, it takes a bigger fish to eat a bigger fly. It’s like trophy hunting, might not catch a bunch, but the one you do will be worth the time spent. 2) Adult onset attention deficit**. That’s right, I’m a.d.d as hell. I know it sounds contradictory being a fly fishermen and all but I can focus my attention on a dry or bobber but when I streamer fish my inner 14 year-old jacked up on Mtn. Dew and Mike & Ikes’ gets to run wild. Not “wear a football helmet” while your fishing with me wild, but enjoying my surrounding, scoping out the next run, day dreaming and just spacing out in general kind of wild. Once the bug is in the water and your appropriate mend made in the line, you’re practically done. A jerk on one end, waiting for a jerk on the other. 3) Streamers have the coolest names in the fly bins, fact. When nymphs, dries and emerges start getting bad ass names like Mongrel Meat, Barley Legal, Zoo Cougar, Snot Goblin or Darth Zonker, I’ll reconsider my life choices. 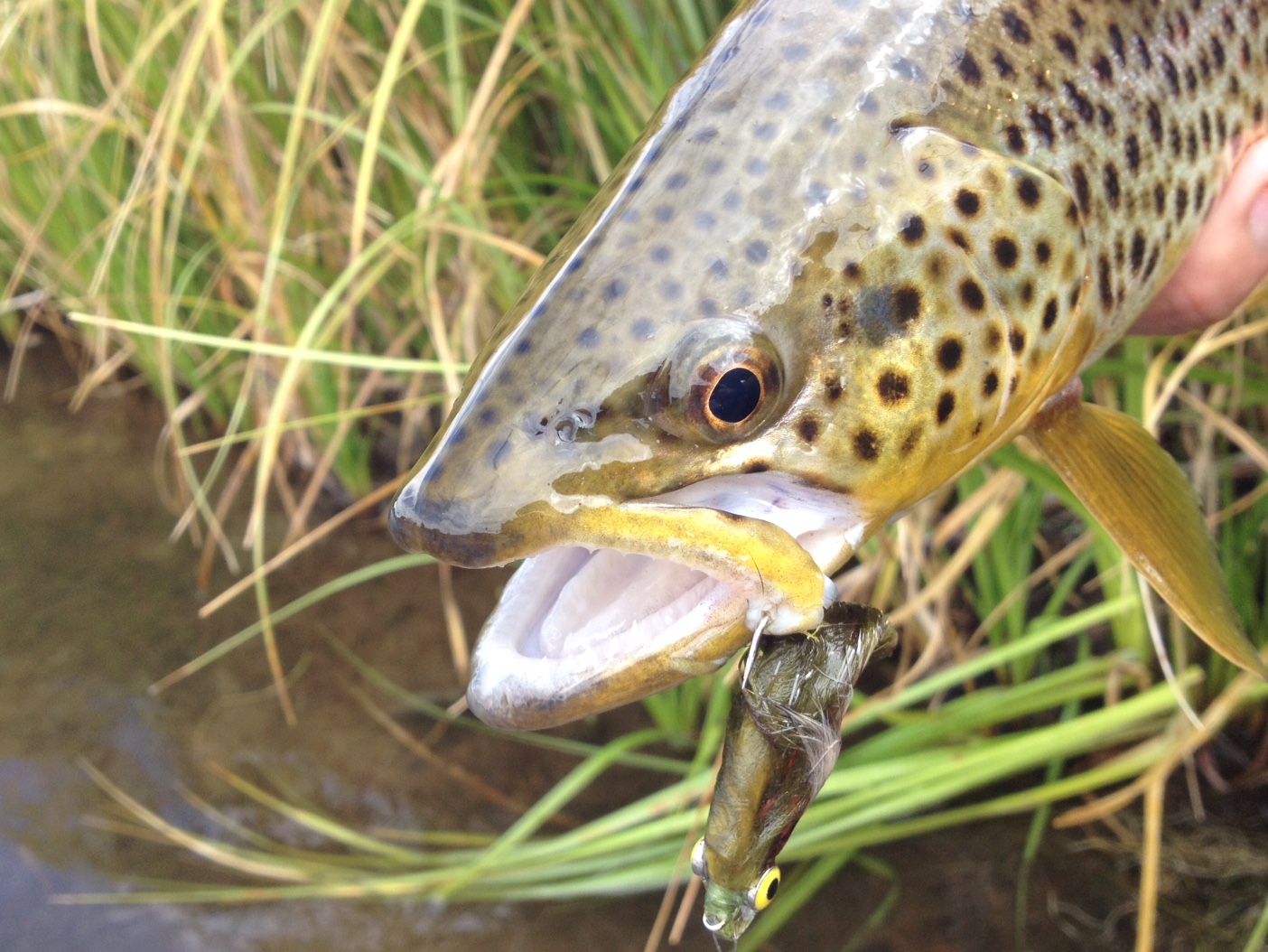 After an hours worth of driving through rain, snow and a combination of both, the Pintler range with a fresh dusting of snow come into view. Sort of. As in your can sorta tell a mountain range lies within the constantly shifting patchwork of clouds. The river is every so slightly off-color thanks to the recent, very much welcome precipitation. This is a good sign. The combination of overcast skies and water the color of weak tea means better cover for fish hiding from predators and I’m hoping that means some of them will be more willing to chase down a meal. After a few swings through a deeper riffle running along side a rip-rap bank I feel a nudge. Then another. And another. Re-cast. The fly is swinging through the same water so it should be….right….about….Boom goes the dynamite! Finally one decides to commit. This back and forth goes on for the rest of the day. A follow, a nudge, then the strike. Lots of fish moving off the rip-rap and under-cut banks to check out the flashy minnow and zonker flies. The key seemed to be repetition, putting fly in front of fish enough to provoke a response. Fly size was also important. With the off colored water I think the fish had an easier time taking notice of the larger baitfish patterns as oppose to the small buggers I slung their way. Let’s just say they weren’t ordering off the kids menu.

By the end of the day I was pretty well soaked, having forgot my rain jacket at home and pretty well sore from casting and trekking all day. I plan on continuing these foul weather streamer sessions as fall continues; you hunters can have your wapiti, I’ll take my trutta. Just next time I’ll remember my coat and pour an extra shot of Jameson’s in my hot-toddy. Humble streamer suggestions for all the junkies swinging for their fall fix…

**Speaking of adult onset attention deficit; it took me two days to get this post done and in the evening between the streamer bite on the MO was great! Buggers, leeches and smolt patterns did well when you could get a cast out in the 30 mph + gusts.