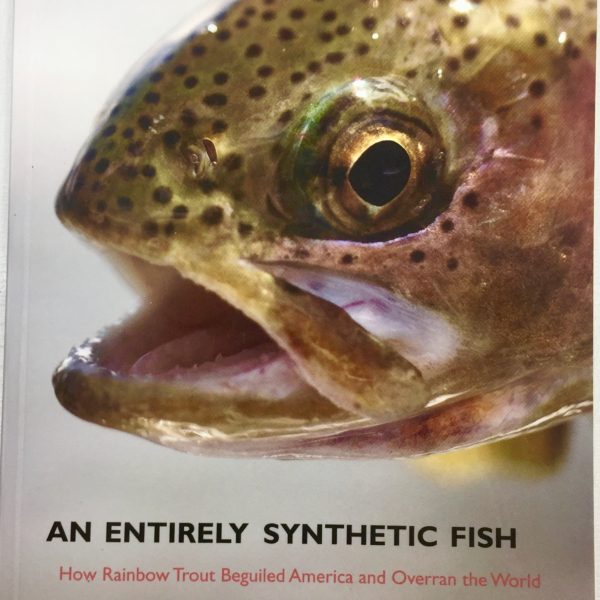 An award-winning journalist, aquatic ecologist, and lifelong fisherman provides an engaging account of the rainbow trout’s discovery and the reasons it has become the most commonly stocked and controversial freshwater fish in the United States.  Anders digs deep into the history of rainbow trout, fish stocking and the culture that has built up by this fish in An Entirely Synthetic Fish.  Did you know one of the main reasons we brought rainbow trout from California to stock in river on the east coast was to “save democracy?” We’ve used rainbow trout as diplomatic gifts all throughout the world. (“Hello, Mr. Prime Minister, I’m from the Unites States of America and I brought you a gift.  Here’s some baby rainbow trout for your rivers.” -crazy, right?) An entire fish stocking culture took over America at all levels and still is dominates in most states.  -Not in Montana though! You’ll read the history and fascinating studies that lead Fisheries Biologist to stick their necks out against the mainstream school of thought and called for the complete halting of fish stocking in rivers in Montana. They went again the 97% agreement that stocking trout was sound science.  We haven’t stocked a river in Montana since 1972 -and Montana’s trout populations have flourished as a result! This is a wonderful read and you won’t be able to put it down. You’ll be talking about it in the drift boat telling your buddies all about  the fish you are trying to catch.

An Entirely Synthetic Fish was the winner of the National outdoor Book Award for  Natural History Literature.

Anderson Halvorson is an award-winning journalist with a Ph.D. in aquatic ecology from Yale University.

Editorial Reviews:
“With prose as engaging as it is thoughtful, Halverson has crafted an absorbing cautionary tale of ecological trial and error, documenting our tardy but increasing understanding of biological interdependence and its immeasurable value.”—Washington Post

“Halverson’s book is a microhistory, an examination of America’s involvement with a favored fish that sheds light on broader truths regarding our recent relationship with the natural world.”—Chronicle Review

“Make no mistake, this book is a major event in the history of angling and ecological analysis. It needs to become the stuff of every angler’s conversation and practice. And it’s such a pleasure to read!”—Gordon Wickstrom, American Angler

“Halverson entertainingly introduces some of the most tangled questions in conservation biology: What is a species? What is native? What is natural? What is wild?”—Jared Farmer, Science

“A well-paced, completely absorbing tale of how man and trout have changed the landscape of the planet.”—Ralph Cutter, California Fly Fisher

“Halverson’s account of the Green River project was gripping, and in fact, read a lot like a novel (I half-expected Bond to show up).”—Tom Chandler, The Trout Underground

“Fly fishing for trout retains its image as a clean, low-impact outdoor activity. Rightly so, perhaps, but after reading Halverson’s book, you will think twice about how close to nature you are when you cast that line out over a rocky pool.”—Laurence A. Marschall, Natural History

“Halverson treats the history of rainbow trout like a detective story and interviews or writes about a cast of fascinating characters . . . an excellent and entertaining read for anyone interested in the history of conservation, but especially the history of how rainbow trout became an entirely synthetic fish.”—Peter B. Moyle, The Quarterly Review of Biology

“Anyone interested in life as metaphor will find here the fascinating historical story of how different people saw their highest ideals and aspirations through the lens of a single, uncommonly compelling fish. And like democracy—but with perhaps more success—they spread it around the world. This unusually well-written, interesting book deserves a place of honor for everyone who sees in trout more than ‘just’ a fish.”—Carl Safina, author of Song for the Blue Ocean, Eye of the Albatross, and The View From Lazy Point

“A fascinating story of man’s urge to cultivate and disseminate a beautiful coldwater fish―at times to the detriment of native species but also the joy of anglers who would not otherwise have the opportunity to catch a trout. A gripping blend of early American history, discussions on taxonomy, and questions of how best to preserve wildness and the indigenous in a world where the human relationship to Nature is complex and always changing.”―James Prosek, author of Trout of the World

“The historical research, personal interviews, and putting it together has produced an outstanding piece of work.”—Robert Behnke, Professor Emeritus, Colorado State University, and author of Trout and Salmon of North America

<BACK to BOOK Category Page