Two Clacks and One RO!

For many of us, fly fishing is all about the solitude and getting away from the crowds. The idea of being on a busy river with boats all around us and only twenty to thirty feet away, isn’t appealing at all. 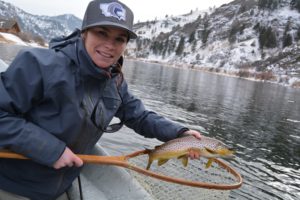 But once in awhile, being close to other boats isn’t that bad, and when it’s some of your closet friends, it’s down right fun.

Recently, on a weekend float that was supposed to see 40 degree temps, the actual temp never even came close to reaching the 30’s! For awhile, we sat in the boats trying to stay warm, and we knew if we succeeded in doing what we came to do, our hands would become cold, and we in turn would become miserable. We decided to say heck with it anyhow, and our lines became wet.

It didn’t take long to get our first bent rod, but it didn’t last long either, the line went limp. Another minute or two later we had a bent rod again and this time the line remained tight. The first fish of the day was in the net, a nice feisty rainbow trout. Due to the cold, we used a Ketchum Release tool so the trout could stay in the water. Too much time out of water with the temps we were feeling and its gills could freeze. A quick picture and the MOBow was swimming away from us so that it would be able to fight another day. 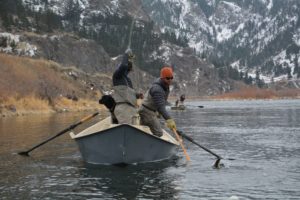 For the next 30-40 minutes and every pass through the area we are working, we get a take. If we don’t land the first fish, we get a second take and sometimes a third. This is outstanding, but Alexia’s finger tips are getting severely cold, even though she won’t actually admit that to me. We row back up river to get near Taylor and Abby, rumor had it that there may be some disposable hand warmers onboard their boat. With the heat packs in her pockets, we do two more passes and connect with two more fish. The rest of the convoy had continued down river to a rendezvous point.

Later in the day and several fish later, we see two of our future boating companions driving next to the river. This is a good thing, since we received a text saying that our shuttle service was unable to move one of our vehicles. They had attempted to jump start it, but were not successful at doing so. Lucky for us, at our shop, we tend to be the jack of all trades, master to none. Jumping the vehicle was a piece of cake; so what could have put a real cloud over the float, barely put a speed bump in front of us and just became part of a more interesting story.

The final two miles of this float is absolutely outstanding fishing. Fish after fish comes to the boat and even a double takes place. The double may have involved a whitefish, but they are a Montana native, so they still count, in fact they should count even more so. 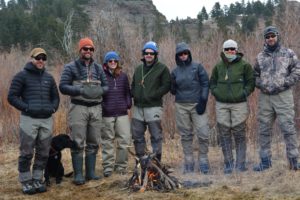 The second day is not nearly as productive in regards to the fish, and every fish we land is very much earned. The weather has a slightly warmer temperature, but still hasn’t reached above 30 degrees yet, and the wind is stronger, so it’s cutting right to the bone as we drift. We pause on an island to capture a rare moment on the water. A group of people who don’t mind if we fish a mere few feet from each other or bump boats. No cuss words are said toward each other, no hand gestures are made. Instead, we smile, we laugh, we share snacks, we share beer, we float side by side, end to end, and have an absolutely amazing time on the water together, in miserable conditions.

Only one boat and three people float on the final day. The temperature is warmer, the wind is less at times, but with a strong gust from time to time. It’s been almost two years since I have been able to spend this much time with the two individuals that are now in my boat. It’s not the best fishing day, but it certainly is far from the worst. The company can’t possibly be beat. 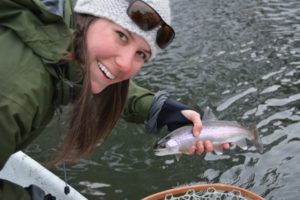 At one point in the float, my rear passenger can’t believe what she just did. This is only day three of a brand new Orvis Recon 10′ 4wt. being used, with its brand new Hydros SL reel, and the brand new Hydros HD Easy Mend line; 15′ of it’s head had just been snipped off by a pair of Dr. Slick Mitten/Scissor Clamps. Luckily, I’m one of the most easy going individuals alive, so with a quick blood knot, we keep the fishing going, and hardly miss a beat. A smile is actually on my face, this type of thing only adds to the experience of floating with close friends.

Experience. How can one even give the definition of this word justice? I can tell you this much. Gather up a group of your closest friends, get a few boats together, and get out on the water. Being out there with a group of people you care about; enjoying the river, the cold, the fish, the sun, the clouds, and everything in between, is what makes us all tick in the same way and honestly, I wouldn’t want it any other way.

Thank You to Taylor, Abby, Teagan, Alyssa, Blake, Kate, and Alexia for one heck of a great weekend. The pirate ship piñata was a great finishing touch!