administrator A "Day in the Life", Reel News 0 Comment 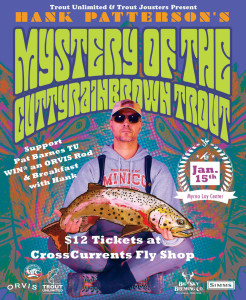 HELENA, MT. January 7, 2016 —Hank Patterson, the hilarious, self-proclaimed “world’s greatest fly fishing guide” will be in attendance to host the Helena premiere of his new feature film Hank Patterson And The Mystery Of The CuttyRainBrown! on January 15, 2016 at the Myrna Loy Center.

The feature film follows Hank as he documents his quest to be the first person ever to catch the mythic CuttyRainBrown trout on a fly rod. Hank Patterson And The Mystery Of The CuttyRainBrown! is the successor to Hank’s first feature film Hank Patterson’s Reel Montana Adventure! that came out in 2014 and played to sold-out screenings in Idaho, Montana and across the U.S.

“I’m stoked to share this movie, many beautiful landscapes, the mythology of the CuttyRainBrown and many of my favorite trout fishing rivers with the world.” said Hank Patterson, “On this journey, I allowed nothing but nothing to stand in my way! Except for two kidnappings, 42 milkshakes, 376 bad decisions, 137 broken leaders, 496 wrong flies and one alleged angler who allegedly saw an alleged CuttyRainBrown. Allegedly.”

As an internet sensation, Hank Patterson’s comedic fly fishing videos have garnered more than 4,000,000 views worldwide. He’s been featured in both the Fly Fishing Film Tour (known at F3T) and the International Fly Fishing Film Festival (IF4), in American Angler magazine as “the world’s greatest guide,” is a two time winner of the Drake Magazine award for fly fishing humor, and was named “guide of the year” by Fly Fisherman magazine.