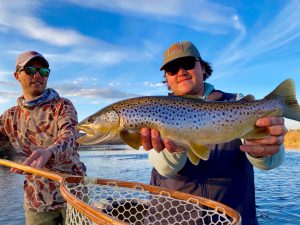 Wait, it’s late April already? It alternately feels like early March or mid May, depending on the weather. Looks like a chilly, fishy weekend will greet us out here on the water. Winds will come out of the north, so make sure you’re bundled up and ready for it to be on the colder side of things. So, why brave snow squalls and a cold breeze you ask? Well dear reader, we’ve got a good Baetis hatch rolling and a streamer bite that is really starting to kick it up a notch. Slap some strong coffee in a thermos, maybe grab a scotch ale or two, and get out on the water. Our time with April is finite.

Nymphing: The nymphing mantra right now is that of your local classic rock radio station: just play the hits. Hot bead sowbugs and Baetis nymphs will get fish in all of those classic inside spring bends. Personally, I have had a sowbug on as my top fly this whole month and haven’t felt a need to mess with it much. I see Baetis nymphs in two major categories: attractors or imitators. Attractors are your pink/flashy/new school style nymphs. Then there’s the homespun, down to earth imitative power of a basic Darth Baetis or Pheasant Tail. Both groups have worked on any given day, but for every day that you hear the go to fly was something like a Pink Lightning Bug, you’ll have a day where the humble #18 Pheasant Tail filled the net. Roughly 5.5’ from your indicator to your BB or B shot will do the trick in a lot of the best water right now. You’ll start to see a few fish in slightly faster buckets that have good depth. On days with strong hatches (more on that in a second) you’ll find a few fish moving into swirlies and other bug-accumulating spots. The whole system is nymphing darn well right now. Take a bobber rod along for the ride if the sun jumps out and puts down the risers or the streamer bite slows down. 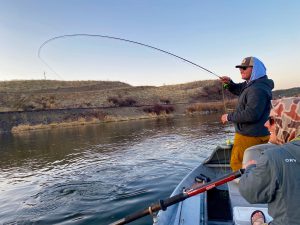 Dry flies: The Baetis hatch is going off pretty consistently. The uncertainty here is not if the bugs will hatch but if we will have the weather for dry fly fishing. We’re looking for cloud cover and possibly some light precip. The sunshine as made things tougher, but if you’re committed to looking, you can find a few targets. The fish have been mercifully unselective thus far. I lean on the classic big bug-little bug combo. The big bug is just a simple Parachute Adams in grey or purple. The trailer is an emerger (RS2) or a smaller cripple. You don’t typically need 5X for this deal; 4X to each bug should suffice. Rising fish have been spotted up and down, so pick whatever stretch you know best and go put some time in out there.

Streamers: Oh yeah, it’s going on. Roll whatever you have confidence in at this point. If you hit two three good banks and don’t get much interest, contemplate a fly change. Keep in mind the low flows have a lot of fish in the first drop off or seam off of the bank.Thought the occasionally gator is tucked right up in the rocks, most streamer action right now comes in that zone away from the river’s edge. I like Sparkle Minnows/Yummys, Conehead Ziwis, and Doc’s Articulators. Play around with retrieve speed, but know that the pause has been a big key of late.

Other bulletins: The shop here in Craig is back in action for the season. Guide trips, rental boats and lodging are still on the table, but we are rapidly filling June/July primetime. Our hours at press time are 8-5 every day of the week. The rainbows are in full spawn mode, so please for the love of pete don’t wade all over those shallow gravel-bottom runs with redds on ’em. We’ll see you out here in person or on the phone at (406) 235-3433.