Spring Fishing is Good -but don’t Tread on Redds 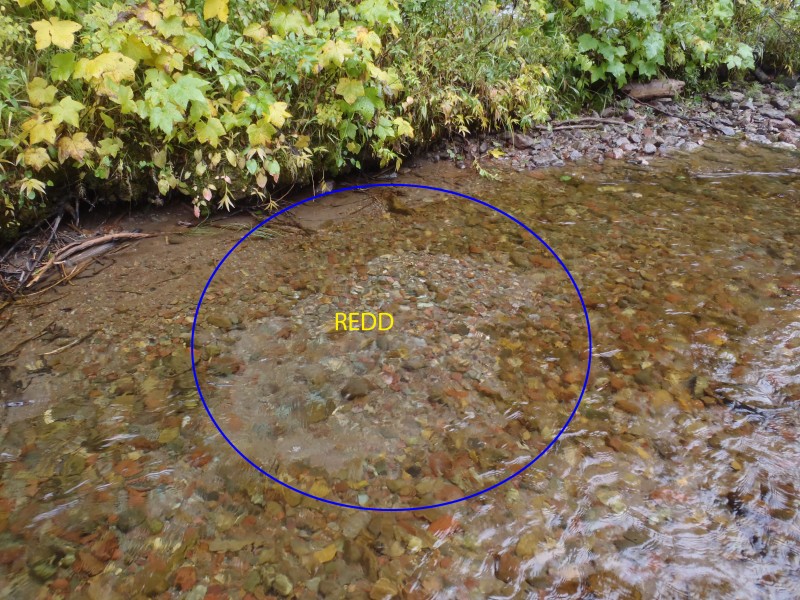 Please be mindful where you wade and don’t Tread on Redds. (Photo from MT FWP)

Spring may have sprung on the calendar but you could fool me by the temperature and frozen precip falling from the sky!  It was warmer in January for crying out loud!  Nevertheless, it is Spring and the Rainbows are doing their thing they do at this time of year.  That means some ornery Rainbows and with the water temps creeping up, feisty Browns.  PLEASE be mindful of redds (trout spawning beds).  You’ll find them in shallow, gravelly areas with a nice steady current flowing over them.  They look like a shallow, scooped out bowl of cleaned gravel that stands out from the surrounding darker, weedier gravel.  (See photo)  You may or may not see trout on the redds, either way, just admire the trout’s innate desire to perpetuate the species and leave those areas alone.  And don’t TREAD ON REDDS.  Be careful where you wade.

Treat ’em with care and release those Rainbows so they can make more.

You can have some amazing fishing in the Spring and still uphold the fly angler hippocratic oath (do no harm) -when you catch a rainbow, take good care of it, keep it in the water as much as possible while you unhook it and then release it quickly.  If you must capture the moment, leave the fish in the net in the water until you’re absolutely ready to snap the shot.  Cradle the fish gently, keeping it low to the water -or even at the surface of the water, snap the photo quickly and get the fish back into river STAT.  (Some of the best photos are fish in the water -check out the photo above.)  I believe in catch & release but also know this is a “blood sport” of sorts and fish do die, even after catch & release.  (Here’s an interesting TU blog post by Kirk Deeter from a while ago about C&R.).  All of Montana’s rivers are managed for wild trout and Montana FWP does not stock rivers with hatchery fish.  Montana stopped stocking our rivers in 1973.  So the trout in the rivers now have to make the trout in the rivers for the future.  That is why Montana’s tributary streams are closed from December 1st until the third Saturday in May.

Now I know, the MO below Hauser (aka “LOG“) is a bit of a different story.  Some wild trout live there and they can successfully spawn and recruit new fish to the population but the large majority of the Rainbows in that section are hatchery fish that have moved up from Holter Lake.  That doesn’t mean you should throw trout conservation to the wind and “raid redds” and wade anywhere you want.  You still should take care where you wade and don’t harass the spawning trout.  Many trout will die up there from exhaustion -both from the riggers of spawning and from the combination of spawning and being caught by anglers.  That’s not necessarily a good nor a bad thing but it won’t have a significant impact on the population in that section because MT FWP will be stocking thousands of more rainbows in Holter Lake each year and they will find their way up into the river.  So for me, LOG is the one place I don’t get bent out of shape when people are fishing over spawning trout.  Just don’t take the same ethic from there to any other wild trout river.  Hauser is an anomaly in Montana and should be thought of in that light.

Fish are pretty easy to catch on nymphs both below Holter and Hauser.  They will gobble up just about any nymph tied with a “firebead” on it with hot orange doing most of the catching.  Midges are out in force and you can use both a midge larva or pupa or even a dry when the conditions are right and the trout are feeding on top.  We also love streamer fishing and catch some seriously large trout in the Spring -both Rainbows and Browns on some pretty big and ugly streamers.

So have fun fishing this Spring but please, don’t TREAD on REDDS.